Club 33 : Have you met Saskia Schatteman? 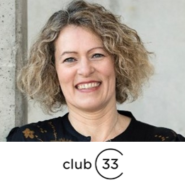 Saskia Schatteman is the CEO of VAR.

Saskia started her career in marketing in the FMCG sector, first at Mondelez and next at P&G, after which she switched to De Lijn, where she earned the title of Marketeer of the Year (NL) in 2008. Next, she moved on to the tech sector, first at Telenet as the Executive Vice President, and then at Microsoft as CMO. In 2016, she became the CEO of VAR.

How does it work?

From time to time, Club 33 invites inspiring media wo(men) for an informal evening, where you can ask them any questions you would like to ask. Each time, we also request they prepare three questions.