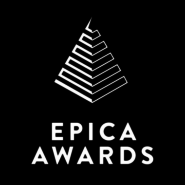 The Epica Awards are often described as the Golden Globes of creative communications: the moment when the press weighs in on the world’s best advertising, design, digital and PR. So it’s appropriate that the dress code for this year’s prize-giving event on November 21 will resemble ink on paper: make sure you’re wearing black and white.

Following the success of last year’s ceremony, the awards show will once again take place in Amsterdam at the KIT (Royal Tropical Institute), whose fabulous marble hall makes a perfect frame for the guests, the winners and the work.

A two-hour ceremony showcasing the winners will be followed by drinks, dancing and conversation, with Sizzer once again providing the music. A few treats and surprises are in store too. For one night, the Institute will be a hub where creativity and journalism interact.

The awards show will be preceded by our Creative Circles conference – also at the KIT – whose theme this year is “Building Brands In A Challenging World”. How can innovative brands, start-ups and today’s creative leaders address our age of uncertainty with new and unexpected solutions?

The Epica Awards were created in 1987 by former ad man Andrew Rawlins. And like the world’s best advertising, Epica sprang out of a great idea. The jury would be recruited not from the advertising industry, but from the trade press.

Today, Epica is open to the creative community worldwide and judged by more than 200 journalists from magazines and websites across the globe.