Club 33: Have you met Jean-Paul Philippot? 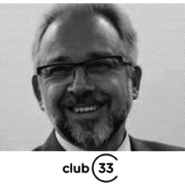 Jean-Paul Philippot is CEO at RTBF.

His early career steps remain a mystery, but we expect him to give you the full story at this Club33 session. In 1993, he became CEO at Iris Hospitals, from which he stepped into his leading role at RTBF in 2002.  On top of his position in Belgium, he also holds the presidency at the international EBU (European Broadcasting Union).

The Club33 community have asked Jean-Paul to prepare for 3 questions: